A Visual Guide to NEMA Ratings for Enclosures (Infographic)

Electrical equipment is only as effective as it is protected. Whether you’re indoors, outdoors, exposed to water, or facing harsh weather conditions, electrical equipment needs to be protected by an enclosure. Choosing the right electrical enclosure requires some knowledge of electrical standards. Ratings from the National Electrical Manufacturers Association (NEMA) provide guidance on what level of protection your enclosure needs depending on the environmental factors it is subjected to.

Use the information in this infographic to easily identify the type of enclosure you need for your specific application.

NEMA is an organization responsible for a rating system that ranks the ability of electrical components and electrical enclosures to resist environmental factors. NEMA standards are commonly recognized and used mainly in North America. These enclosure standards list out the enclosure’s ability to withstand certain elements like water, dust, chemicals, ice and oil.

Unlike UL and CSA standards, NEMA does not require independent lab testing for an enclosure to be considered up to code. Instead, NEMA puts compliance in the hands of the manufacturer. NEMA doesn’t manufacture any enclosures itself; the agency exclusively establishes industry standards.

What do the different NEMA ratings mean?

NEMA ratings use different numbers to represent protection levels for electrical enclosures. It’s important to note that a higher number doesn’t necessarily mean a higher level of protection. More often than not, the rating number is correlated with the enclosure’s ability to resist water.

Whether you’re an engineer, inspector or installer, choosing an electrical enclosure with the right levels of protection is paramount to worker safety. All enclosures prevent access to hazardous parts, but they provide varying levels of protection against other elements. Having a working knowledge of NEMA codes ensures that your enclosure will keep your equipment protected and running efficiently.

This infographic provides a visual representation of the different levels of protection each type of enclosure offers. Whether you need protection from dust, dirt, ice, water or corrosion, you can select the right enclosure for your application. Once your enclosure is properly installed, you’ll know exactly how protected your equipment will be. Use these codes to find an up-to-standard enclosure every time.

For a complete description of the NEMA ratings and test criteria, learn more from NEMA. If you have questions beyond the NEMA rating, check with the enclosure manufacturer for details on specific enclosures and their certifications.

Carlton-Bates Company (CBC), part of the Fortune 500 WESCO International, Inc. family of companies, is a trusted provider of specialized services and a leading distributor of automation controls and electronic and electromechanical products. 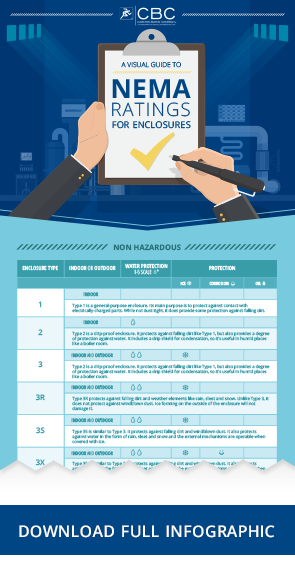 There’s no doubt that in today’s market we’re seeing a growing demand for solar energy. With that comes a growing need for energy storage.

The What, Why and How of Energy Storage

The U.S. energy storage market is growing at a rapid rate. In 2020, the market surpassed $1.5 billion and is expected to become an $8.9 billion annual market by 2026. With this significant growth, it’s important that contractors understand what energy storage is, why it’s important, what problems it’s solving, and what opportunities there are to leverage energy storage.

Partnership Is Key in Bringing a Fiber Network to Rural Iowa

Deploying a rural broadband network can be challenging, but with decades of experience and expertise in the broadband industry, WESCO | Anixter can provide the products, services and solutions to successfully deploy fiber networks.