Whether intentionally or not, users on desktop computers and other peripheral devices inside a network have a tremendous capacity to do harm. According to a recent IBM cybersecurity study, “inadvertent insiders” were to blame for more than two-thirds of the total records compromised in the U.S. in 2017.[1]

Within the U.S. government and military, sensitive data security breaches have caused agencies to demand a higher level of security from their IT vendors. The NIAP (National Information Assurance Partnership), which agencies rely on to test and certify the security capabilities of IT products, emphasizes the ability to combat these internal threats. They have rigorous requirements for products that connect with and manage users’ peripheral devices, such as the KVM switches in a network.

A KVM switch that’s not secure provides an open door for in-house users to:

These vulnerabilities are even more of a threat in the BYOD (bring your own device) era in the workplace, where laptops, tablets, and smartphones often play dual roles as work and personal devices. These devices may not be as strictly regulated by IT security protocol and are vulnerable points that can introduce viruses and malware into a network.

Select IT product manufacturers are enhancing the security capabilities of their KVM switches to address these challenges and to meet NIAP standards. Secure KVM switches allow users to access multiple computers with different security levels from a single console (keyboard, mouse, and monitor) while protecting data from accidental or unauthorized transfer when switching between systems. This protection starts with the internal construction of the KVM switch and extends to its ability to restrict the types of peripherals that can connect to it. Some specific features include:

These features align with NIAP requirements for the highest levels of secure switching used in the U.S. Department of Defense and Department of State SIPRNet (Secret Internet Protocol Router Network) and JWICS (Joint Worldwide Intelligence Communications System), a secure computer network used primarily within the intelligence community. For the most up-to-date standards of security, a KVM switch should meet NIAP’s Common Criteria Protection Profile for Peripheral Sharing Switches Version 3.0, also known as “PP3.0.”

Although the NIAP certification was developed to meet the strict security requirements of government agencies, it does not prevent products from being used in non-government applications. Meaning any organization, such as healthcare and private corporations, looking to protect sensitive data from cyberthreats can take advantage of the same protection levels that this class of products provide. 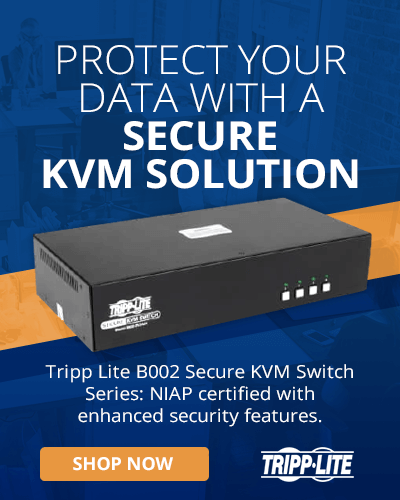 Can a business afford to overlook better ways to manage industrial equipment and control logistics?

This is the digital universe. "It is growing at 40% a year into the next decade, expanding to include not only the increasing number of people and enterprises doing everything online but also all the “things” — smart devices — connected to the Internet, unleashing a new wave of opportunities for businesses and people around the world." - EMC Digital Universe with Research & Analysis by IDC

The Built Environment: Are you ready for the changing landscape of Infrastructure Technologies for IoT?

The American Marketing Association defines marketing as "the activity, set of institutions, and processes for creating, communicating, delivering, and exchanging offerings that have value for customers, clients, partners, and society at large."