As every company grows, they’ll find standards their clients and customers expect—or need to meet—aren’t always the same. These different standards can make it impossible to source key assets efficiently. That’s why it’s important to understand the applicable standards, so you can evaluate options for streamlined sourcing.

In the case of electrical enclosures, the relevant standards are generally known by the bodies that set and promote them: NEMA and IEC. The relevant questions for facilities—and those that serve their needs—are simple to ask: when and why should we choose enclosures that meet one standard or the other? How do they differ? While the choice may once have been simply an issue of location, globalization has started to replace everyone’s location with one answer: the world.

In the case of NEMA and IEC standards for enclosures, they approach the problem of defining and meeting a standard differently. As an engineer looks to specify an electrical enclosure for a space, they have a lot of environmental factors to consider, and they may find one or the other standard works for their safety or asset life cycle needs. Facilities may specify needs to their contractors or solution providers by referring to either or both standards, or they may have policies or business relationships that require conformance for certain facilities. In some cases, it may be unclear what standard should be met or used. A facility may not specify, or may reach out to their preferred partner to help them apply standards to help them mitigate both risk and cost.

When it comes to actual performance in the real world, how a manufacturer meets those standards is what makes the real difference, both for safety and for efficient procurement and installation.

A Tale of Two Enclosure Standards

The standards in question were developed by different bodies and evolved differently because of their different focuses. The Type 250 standard was developed by NEMA (National Electrical Manufacturers Association), an ANSI-accredited standards developing organization in the U.S. that promotes electrical product standards.

The IEC (International Electrotechnical Commission) is an international standards organization, and European standards in the 60000 series are based on IEC standards, with or without amendments.

In general, NEMA standards tend to emphasize broad applicability, while IEC standards favor specificity. For enclosures, the IEC’s standards concentrate on degrees of protection for some key needs. The NEMA standard doesn’t grade by degree in the same way, but requires more criteria to be met.

Before We Dive In: Standards vs. Certification

While NEMA and IEC set standards for how the enclosures should perform, they do not certify that such standards are met. They provide guidelines and promote the use of standards, but they are neither compliance organizations, nor do they test whether products meet their standards.

Many manufacturers do their own testing to make sure standards are met, but NEMA and IEC do not require third-party verification. Due to this fact, the performance of an electrical enclosure at any assigned rating can vary by manufacturer. When choosing an enclosure, it’s important to verify with the manufacturer how they assure standards are met. Manufacturers can advise on how their products bearing the CE mark (per European Union directives) or a certification by UL demonstrate that a product meets or exceeds a standard.

For the IEC standards, the general requirements for empty enclosures are given in 62208, but the degrees of protection afforded by the enclosure are provided by 60529 and 62262. The International Protection rating (IP) gives both a range of protection against solid objects and the harmful ingress of water, using a number for each. As a baseline, IP 00 would be no protection.

As the first number goes up, the enclosure is protected against particles of smaller and smaller diameter, up to 6, described as dust-tight. The second number is for harmful ingress of water, where 1 corresponds to protection against dripping water. That number progresses through increasing levels of protection, up to 8, protection against immersion, and 9, protected against a high-pressure water jet. The standard gives more information about how that protection is defined, such as the minimal duration of a test of the exposure corresponding to that code.

The IK code classifies the degree of protection afforded against impact. Again, the baseline of IK 0 is no protection. As the IK rating rises, the enclosure has more capacity to protect its contents from external mechanical impacts.

The Type 250 standard addresses ingress by particulates and water, as the IEC standards described above do, but the Type rating system also addresses minimum protections for corrosion resistance (both indoor and outdoor), oil swell and gasket aging.

The Type 250 standard publishes a table showing what degree of IP code is met by a particular Type. For instance, a Type 4 matches up to a IP code of 6 for both the first and second numbers. However, this doesn’t work the other way. IP 6 doesn’t really match a Type 4 rating, since Type 4 also includes requirements for outdoor corrosion, gasket aging and external icing.

To standardize facilities globally (or to move toward a procurement and installation procedure that’s similarly efficient), both NEMA and IEC may apply. It’s important to specify an enclosure that’s best for an environment or a design, but it doesn’t necessarily mean that a product is best if it is focused on one standard or the other.

A product that meets both sets of criteria would be the optimal choice. nVent Hoffman is one of only two manufacturers that can help you standardize enclosure procurement and installation by offering equipment that meets both.

This standard approach will help you:

In addition, nVent Hoffman’s Click-In enclosures take that streamlining to a new level, adding time- and labor-saving innovation on top of the efficiencies created by single-sourcing parts globally. Watch how much faster an enclosure can be safely put in place.

A more efficient engineered solution has multiple benefits. If you have more questions about NEMA and IEC standards, or sourcing and installing electrical enclosures, contact your local WESCO branch.

nVent HOFFMAN is the leading designer and manufacturer of enclosure solutions that safely and reliably protect the electronic controls and mission-critical electrical systems in industrial, data communications, commercial construction, and government applications. 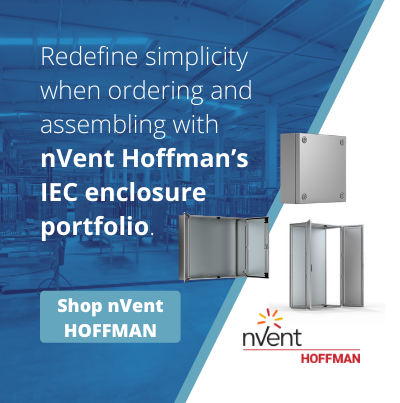 3 Reasons Why the Right VFD Cable is Important

VFDs are critical in today’s environment to ensure an efficient manufacturing process. They are used to control the frequency and voltage of an AC motor and yield additional performance and energy savings. Many operations professionals depend on them to regulate nearly every motor in a facility – sometimes hundreds of motors!

The Benefits of LED Replacements in High Bay HID Applications

By GE Current, a Daintree Company

With sufficient lighting performance and intense illumination, the use of high-intensity discharge (HID) lamps has been a primary technology choice for years. But regardless of its popularity, should you be aware of any drawbacks to HID applications?

Modernizing and Securing Your Industrial Network

Manufacturing facilities are becoming more connected, and the associated benefits are limitless – from becoming more agile and competitive in the market, to maximizing efficiency, reducing costs, or monetizing data. It’s becoming clear that implementing smart manufacturing best practices is no longer a choice but a necessity for survival.